OR WHAT IS IMMERSIVE INTERACTIVE ART?

When all hope is gone to explain the future of art, to explain things that can’t be explained as they need to be experienced not explained, then history has to help.

Before I open the historic records I show you a future that is near. LEIPZIG BIENNALE will present A LIVING DOOR. Hopefully this does not ring a bell in you as then you understand it immediately and say “ah cold coffee” … you may add if some people around you wonder on your remark: “indeed famous cold coffee”.

Imagine two bodies built in the computer, having an aura, so let’s call them Auric bodies. Let them stand in the frame of a door and you have to pass between them to enter the exhibition. Would you turn your face, as there is not much space left, so you have to turn your face to slip through, towards the male or the female Auric body? Is there such a thing female or male in the virtual identities of the computer? Are you what you show to be? Who are you? Are you more real as the Auric bodies you pass?

In 1977 Marina Abramović and Ulay performed A LIVING DOOR in Bologna, Italy. It became one of the landmarks in performance art. Now we point to the future of performance art: IMMERSIVIA.

Art Blue is a virtual character, created by Erva.Re. Art Blue lives in various worlds. Frist the grids that have Hypergrid enabled: Craft World, Metropolis, OS grid, Francogrid. Grids, where Art Blue lives without the ability to move out, are: Second Life, Sansar, High Fidelity, Sine Space. In Second Life Art Blue is controlled by an AI, known as “the owl.”

The owl goes by various names. Neruval, Cyberphoria, and more.

The theme A LIVING DOOR follows the idea TOUCHING REALITY that was in focus of 1Biennale 2018.

Watch the machinima by WizardOz Chrome.

THE FAKED VR was first presented at the OSCC19 by Herzstein

THE WRONG has become the biggest art show. The 2019/2020 edition shows over  2,000 artists and 180 curators. THE FAKED embassy became one of the epicenters of THE WRONG. 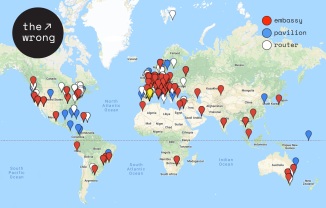 UMMAU42 is an unknown user in the hypergrid. Nevertheless the user exists and teleports. Here comes the dialogue, March 9, 2017. Hypergrid Safari.

Thirza Ember: Mostly, we were growling over the ongoing UMMAU issue – that’s when the name of an avatar doesn’t appear above their head, and the tag reads UMMAU42. This has to do with the fact that when your avatar arrives in a region, your viewer and the region begin communicating. The region tells your Viewer about all the people, objects, textures, scripts etc that the region contains. At the same time, the region is asking for information – not only the appearance of your avie, but also the contents of your inventory – the stuff in your suitcase, and (mostly because OSGrid doesn’t use the My Suitcase Folder strategy) the Region also tries to read everything in all your other inventory Folders – it can’t, but it makes multiple attempts before giving up.
Now, that’s a lot of back-and-forth communication for the server to handle, even if it’s just one avie entering a region. Imagine the amount of data exchange that happens when 20+ people teleport in from all over the hyperverse. Even more stress on the server if someone has an attachment that has some funkiness about it, like they didn’t put it in their My Suitcase, or it’s flawed mesh.
Eventually, when the flood subsides, names will show up. Sometimes, you can force names if you Friend or check the Profile of the person who appears as unknown, but… this is why devs smile at you when you complain about UMMAU.
Kiely Kjeller: what does the ummau stand for anyway? probably something like UFO, hehe
Sunbeam.Magic: it might mean You Might Miss Avatar Unavailable ???